If age is just a number, then my upcoming birthday is definitely doing a number on me. Yep. This November I turn half a century.

I don’t want to say that I’m taking it hard, but there may have been more than a few tears several months back when those bastards at AARP sent me a friendly – albeit early – reminder to join my fellow senior citizens in denial.

Honestly, the previous milestone birthdays didn’t bother me a whole lot, with the possible exception of 25. Pffffft! I was in love and lust at 30, and ten years later I was preparing to adopt a baby so I hardly felt ancient with such a wondrous journey ahead of me.

Snorts at the irony.

The 40s have surpassed most of my expectations. Not only did I become a mother, but I moved back to Colorado where my heart has always resided, opened a dream business, made a million friends and went on to enjoy another dream job when the art gallery had to close. Every day I do work that usually feeds both my bank account and my soul – not everyone can say that.

Then a couple of years ago I fell headlong into my mid-life crisis. No Botox or Porsches for me. Instead I fell in love with a much-loved/maligned teen book series. Since reading the first breathless word, that guilty pleasure gradually evolved into a wide, crazy circle of friends around the world and adventures I never would have imagined. The books and the friends also helped to renew my passion in fiction writing and I eventually wrote my own book.

I may have a few battle scars and a LOT of gray hairs to show for my 40s, but I wouldn’t change much. And speaking of gray, my formerly blonde hair has begun to turn dark with a rapidly developing silver-ish streak of hair on one side. Think an older version of Rogue from the X-Men. Yes, I plan to fully exploit this comparison with middle-aged geeks as long as they’re rich and no longer live in their parents’ basement. 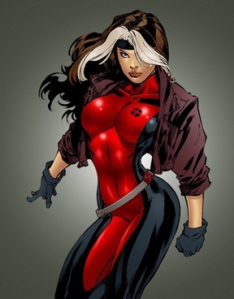 It's a little scary how much we look alike. Form a straight line, boys.

So a few weeks ago, one of my twitter friends wrote a blog post about the new trend in bucket lists: 30 before 30, 40 before 40, etc. Sue’s turning 50 in four years and wanted to start working her list of things to accomplish now.

It got me thinking.

Most days, I don’t feel old but this birthday has definitely freaked me out a little. So I had some more wine and wondered what if I just embraced it? After all, the 40s kicked ass so who knows what could happen in the next decade?! To help motivate the enthusiasm, I decided my own list was in order. As of today, I only have four months instead of four years, so a trip to Italy or marrying my much younger Imaginary Boyfriend are probably off the table this time around. Nevertheless, I managed to come up with 50 attainable (I think) goals.

I’m not going to list them all here because some are too personal and most would bore the hell out of anyone but me. And hopefully, with each item I cross off before November 16, that intimidating number becomes just a number, baby – not a definition of me: middle-aged, hopelessly romantic, brave, silly, sometimes weary, often hopeful, always growing woman.

I’d love to hear your goals and dreams as the years tick by and I appreciate the encouragement as I tackle this list.

Oh, and if you’d like to call me Rogue from now on, I’m cool with that.

Some of the crazies I plan to meet in September. #42 - CHECK!

17. Go on a date – It’s been a while. I need to exercise the muscle that makes it possible for me to function in public.
18. Start journaling again – I did this for decades and just stopped for some reason.
24. Finish first draft of Leadville novel – This book is tired of being in my head and needs to find its way to paper.
28. Find an eager teenager to babysit at my beck and call – This could help with general sanity and item #17 specifically.
29. Set up my bills to pay online
32. Submit one short story, somewhere, for pay or contest
36. Wax my lip – Again, see #17.
38. Host a party at my house – I wasn’t Martha Stewart, but I used to love to entertain.
41. Take a digital sabbatical for at least 24 continuous hours – I took this from Sue’s list. I’ll probably end up in rehab with Lindsey Lohan before the day is up.
42. Meet at least 5 more twitter friends in person – This will occur with item #8.
43. Write a letter to my parents, thanking them for raising me and being there for me – Also borrowed from Sue’s thoughtful list.
46. Make a cake or cookies for my daughter for no reason at all – It could tarnish my reputation as Worst Mother of the Year, but hey…
50. Say farewell to the 40s with wine, women friends and Edward! – Breaking Dawn, pt. 1 in theaters Nov. 18. Don’t judge – it’s not pretty;)

Cheers to half a century, well-lived.