If you’re visiting my blogsite via open invitation, then you probably already know I’m a Twitard, and usually proud of it. After giving up on understanding — much less explaining — my obsession with an imaginary universe created by Stephenie Meyer, a couple of mediocre movies and a British actor young enough to be my… well, let’s just say he’s young, I gave in and drank the Kool-Aid.

I was in good company.

I’ve found a community of 834,016 other women in my general age range (I counted, but they all lied about their age) who are just as crazy. And we don’t care. We’re having too much fun to worry about what everyone else thinks is surely temporary insanity in need of a good 12-step program. We’re enjoying the ride and have no intention to stop for non-believers.

One of the unexpected side effects of the Twilight addiction is fan fiction. In case you weren’t aware, there are countless writers out there re-imagining, supplementing or completely warping Ms. Meyer’s magical world. I reluctantly gave in and read one after seeing it mentioned on a daily basis. Wide Awake by Angstgoddess003 is commonly and affectionately referred to in the Twi-community as the gateway drug to all fanfic.

From there, I read a few (read: too many to count) others and was soon in awe of the level of talent out there.* They’re writing stories good enough to publish, for fun and for FREE. Why would they do that?! Being a serious writer *cough*in my head*cough* I knew I would never go there. I love the characters Edward and Bella and couldn’t imagine bending them to my literary will. I had scruples and a mortgage.

You can see where this is going… I got an idea that seemed pretty different than any other story lines I’d read. I wrote a scene or two. Then a chapter appeared. Flash forward a few weeks and I have almost seven chapters written, a full outline of approximately 20 total chapters, a fan fiction account and three amazing people who read, edit, proof, nit-pick and crack-wise on each page I write.

I call it The Family Business and I am having the time of my life. Oh, and so I can rationalize the time spent on a story that will never cross a publisher’s desk, I admit that I’m learning so much about the writing process. I hope you enjoy reading it as much as I am creating it. (It’s actually writing itself, but I’ll save that for another post, another day.)

If you’d like to see what Edward and Bella are up to in my world, go to

I’ll be using this blog for teasers, artwork and song lists for the story, but I’ll also be writing whatever happens to interest me and perhaps post a few non-Twi stories I’ve written. *I may list a fanfic recommendation sometimes, but I’m warning you – I’m picky. 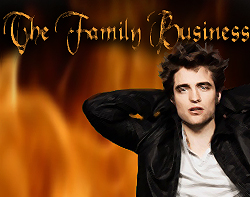 Summary: Edward Cullen meets the girl of his dreams but keeps her at arm’s length due to his complicated, dangerous family life. When cruel irony brings them together again, he’s forced to make a devastating choice: Save her from a fate worse than death or save her from the family business. Definitely AU (Alternate Universe) It’s not for the kiddies.

4 thoughts on “Opening the doors on The Family Business”