Reprinted with permission from the Berthoud Weekly Surveyor 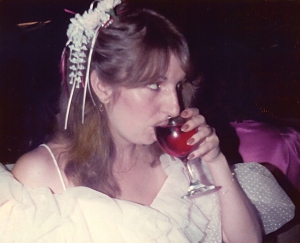 If you could see the entire dress (wedding #2) you'd understand why I was drinking. Photo courtesy of the Susan Richards Historical Society.

The history of the bridal party is a colorful one, with origins in the Anglo-Saxon era when a groom would abduct his bride from a nearby village. He’d enlist help, and this little army of kidnappers evolved into today’s groomsmen. The bride would have her own cadre of friends as well, but if the marriage was completed, they obviously weren’t of much help.

As punishment for the girlfriends’ ineffectiveness, the bride would insist they wear garments so hideous the groomsmen would have to look away, thus ensuring none of them were ever chosen for marriage.

All right, I might have embellished this historical fact just a little, but as a five-time also-ran, er… I mean bridesmaid, I consider myself a bit of an expert on the subject. There are all kinds of anecdotes on the origin of wedding gowns, rings, cake and more, but little has been written about the beleaguered women who assist the bride on her journey to the altar. Maids and matrons of honor and bridesmaids up the wazoo have stoically planned showers, soothed nerves and sup-ported brides throughout the years, only to be rewarded with frocks so bad there are websites dedicated to the phenomenon.

This is why it’s always a good idea for a bride-to-be to choose her closest friends and family to stand attendance at her wedding. Mere acquaintances will have a much harder time keeping a straight face when told that she can wear the dress again, it’s so pretty and practical. When my oldest friend (wedding #5) told me that my tea-length Jessica McClintock dress would definitely be worn again, I smiled and dreamed about all of the garden parties in Birmingham I’d no doubt be invited to.

The corner into which brides back themselves is often the number of bridesmaids chosen. Six or eight women are bound to possess six or eight body types and the most successful fashion designer in the world would be hard-pressed to find the perfect gown for each one. Such was the case with wedding #2 back in the early 1980s. The dress was so bad I didn’t even hide my reaction, but my friend waved me off and explained it was the only one that fit everyone, including her plus-size sisters.

I actually did wear that dress again. And again. The pink dotted-Swiss monstrosity with puffy sleeves and a crinoline-enhanced skirt made an excellent costume as Little Bo Peep, as well as a saloon girl when I volunteered at a mining camp festival for several summers. The first Halloween party was actually hosted by the newly wed couple so the look on her face was worth the cost of the dress.
According to my informal survey, mine wasn’t the only gown ripped out of a scene in “Gone with the Wind.”

“I wore one that was red satin — spectacular in every sense of the word. It had a deep cut back with a big bow at the butt and a princess neckline. I wore it the following Halloween as Scarlett O’Hara,” said a similarly punished bridesmaid.

The cocktail dress with separate floor-length skirt I wore in wedding #1 was the only one of all that I actually did wear again to social events. Sadly, the dress stayed in style longer than that particular marriage.

When considering the legend of the ugly bridesmaid dress, I have to question the bride’s motives. Is it so important to ensure being the center of attention that you’ll cover your best friends with fabric more suited for upholstery or colors not found in nature? One honest soul in my in-formal poll admitted she didn’t make the dress choice too bad, but definitely made sure they didn’t outshine hers.

Maybe it’s time for the soon-to-be-wed women of America to take another look at history. For many years, the attendants’ dresses were much like the bride’s own gown. This tradition was in-tended to confuse evil spirits or jealous suitors that might attempt to harm the newlyweds. Reviving this practice from days of yore would keep the happy couple safe and the bridesmaids happy. Win-win.

As long as I’m taking on tradition, I may as well pick a bone with the wedding industry itself. Is there a plausible reason – besides profit – why the guys can rent their tuxes and the women-in-waiting are required to drop a lot of cash on a dress, shoes and accessories to keep forever? The memories of the inevitable drama that arise when you throw several women and garish floral pat-terns together is enough. Must we also open our closet every day and be reminded of the fittings, the alterations, the expletives? I’m quite positive that we women can take better care of a rental dress than a half dozen overgrown frat boys can. Give us a try and you’ll see a happy, well-dressed bridal party.

This is what happens when hookers get hold of a cotton candy machine. Photo from uglydresses.com

In the interest of full disclosure, I am, as of today, always a bridesmaid – never a bride. However, I swear on a stack of Modern Bride magazines never to ask my dearest friend – just one, not six – to wear something I wouldn’t be caught dead in. I also promise not to utter the words “And you can wear it again!” unless I’m hosting a follow-up masquerade reception. Really, I do

5 thoughts on “The ugly truth about bridesmaid dresses”