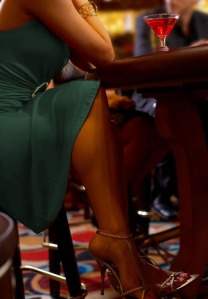 The pub was smoky and I longed for the cities that banned the nasty habit from public places. I didn’t lose much sleep over civil liberties and second-hand health problems; money was short and I simply couldn’t afford another steep dry cleaning bill. Hopefully this would be my last seedy joint for a while. I had a good feeling about it. Maybe the loser I had been tracking for four months would finally surface here.

My business card said “private investigator” and I was one of the best.

My long legs and school-teacher demeanor generated trust in most people and I got what I needed when most Phillip Marlowe types failed. Women tended to confide in me and men pretty much told me everything when I batted my eyes and inched up my tweed skirt.

Cheating? Maybe, but in my line of work you use any and all resources available.

Unfortunately, this latest perp was not in my line of work and all expenses were coming out of my own account. No grateful client writing me a check when it was all over, or in many cases, not-so-grateful when I had to break the bad news about their unfaithful spouse. Fortunately, however, the philandering hubby work was coming in handy since the little guy I was trailing thought with the same brain that has tripped up men since the dawn of, well, man. They always make mistakes when their testosterone contributes to the decision-making process.

I spied an empty barstool near the door and slid on, crossing my legs so that any casual admirers could appreciate the way they reached all the way down to the bottom rung. The place was loud so charades worked best for ordering. The bartender slid me a sweating glass half full of Ireland’s best single malt on the rocks after I indicated what I wanted.

I turned and surveyed the room. Definitely his type of dive but it was too crowded to see him if he was here, so I sipped my whiskey and people-watched.

Pretty soon I realized I was the one being watched. Just a feeling, but I had been around the world and in a lot of bars recently. I trusted the tickle at the back of my neck and casually looked around me. He waited until he caught my eye then smiled what I’m sure he considered a charming entreaty. It was more of a leer, really, but I forced myself to return the smile and tuck my head slightly in a demure, yet flirty gesture.

It was the creep I had hopped continents looking for and I didn’t want him to spook and run. He was even shorter than I thought he would be and in spite of the lascivious smile, I could see the charm that got him in doors.

“Are you new in town?” he asked predictably.

“I am,” I replied, “and you must not be from around here originally. What is that charming accent?”

I cooed and fawned about that for a few minutes, asking questions and polishing his ego. He bought me another drink, admiring my choice in liquor, and we made the usual small talk heard in pubs and clubs around the globe. When I thought it was a comfortable stretch of time, I stood up and tried not to tower over him. The diminutive fellow wasn’t phased at all in our differences in height and took his time checking out my gams.

“I’ve really got to go,” I said, sounding somewhat reluctant, then added, “You could come over for a nightcap if you’d like. My flat’s not far from here.”

He pretended to think about it for a second, then grabbed his hunter green wool jacket from the stool and followed me. He didn’t question my detour down the alley next to the pub and I could hear him right on my heels.

As soon as we were out of the circle of grimy lights spaced haphazardly down the walkway, and I heard no more voices, I whirled around. A short burst of mace and I slipped the cuffs on him before he even knew what happened. My four-door import was just a few feet away and I threw the stunned stooge over my shoulder and dove into the back seat with him.

Breathlessly, I sat him up and demanded my due. “I’ve been chasing you since Ireland, you little twerp; now where’s my pot of gold?!”

I wasn’t sure whether to expect rage, denial or both but he sputtered a little, then looked resigned. He knew the score.

He was a leprechaun, I caught him, and there were rules to be followed. It didn’t look like dry cleaning bills were going to be a problem any more.

One thought on “The Private Eyes of March”